Prior to becoming an opera singer, Paul worked for several years as a professional actor in Scotland. 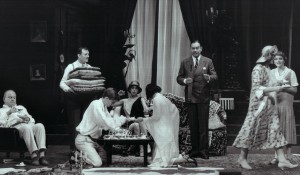 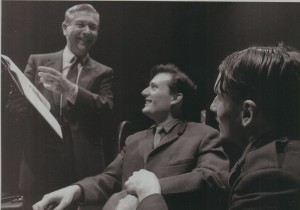 As young Siegfried Sassoon in “NOT ABOUT HEROES” with author & director Stephen Macdonald (older Sassoon) and Cal Macaninch (Wilfred Owen) at Craiglockhart.

HEROES THEATRE COMPANY
Siegfried Sassoon in “NOT ABOUT HEROES” written & directed by Stephen MacDonald. Performed at Craiglockhart where the play is set (with Stephen MacDonald as the older Sassoon) and then on tour (with Paul as Sassoon young & old). ‘88

ARCHES THEATRE, GLASGOW
Putnam in “THE CRUCIBLE” by Arthur Miller ‘94 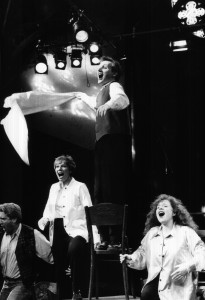 As Man 1 in “CLOSER THAN EVER” with David Greer, Val Munro & Alicia Devine.

ORIGINAL SHAKESPEARE COMPANY
Balthasar the singer & Conrad in “MUCH ADO ABOUT NOTHING” by Shakespeare, Cottier Theatre, Glasgow  ‘95

GREAT WESTERN THEATRE COMPANY
Figaro in “THE BARBER OF SEVILLE” by Beaumarchais
The Doctor in “WOYZECK” by Buchner
Voltore in “VOLPONE” by Ben Jonson
John Jasper in “THE MYSTERY OF EDWIN DROOD” by Charles Dickens, adapted by Leslie Crook
Oronte in “MOLIERE’S THE MISANTHROPE AMENDED” by Leslie Crook
Willie Curry in “CUTTIN’ A RUG” by John Byrne

TRYST THEATRE COMPANY
Davies in “THE CARETAKER” by Harold Pinter

UNIVERSITY OF GLASGOW
Henry VIII in “HENRY VIII” by Shakespeare
Claudius in “HAMLET” by Shakespeare
Menenius in “CORIOLANUS” by Shakespeare
Hepple & MacLeish in “REVENGE” by Howard Brenton
Tolen in “THE KNACK” by Ann Jellicoe
Wilson in “THE RUFFIAN ON THE STAIR” by Joe Orton
Leonardo in “BRISTO” by Antonio Ferreira
Ralph Roister Doister in “RALPH ROISTER DOISTER” by Nicholas Udall
Various Committee men in “ARE YOU NOW OR HAVE YOU EVER BEEN?” (Transcripts from House Unamerican Activities Committee hearings)
Duke in “THE LYTSTERES PLAY: Trial Before Herod” (from the York Mystery Plays)
One of the 3 Marys (along with Peter Mullan & Cal Macaninch) rolling away the stone in a 13th Century Liturgical drama.