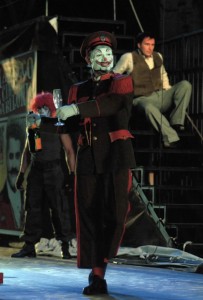 Malicorne is played with complete operetta expertise by Paul Featherstone who also provided a new book and lyrics which were very much in the spirit of the Offenbachian genre.

Paul Featherstone’s new English version captures the absurdity and mild salaciousness of the Offenbachian genre. An operetta performer to his fingertips, he also takes the chief comic role of the Duke’s servant, Malicorne, proving expert at playing the fool.

Paul Featherstone’s Malicorne was the prime comic part, complete with a patter song about statistics! Featherstone was a complete exemplar, making the text really count and always musical.

“Carl Sanderson’s Field Marshall and Paul Featherstone’s Duke were once again a superb double-act: their performances were full of vitality. Featherstone minced with ludicrous pomposity, resplendent in red velvet knickerbockers and diamond-patterned stockings. This was Alice in Wonderland meets Oscar Wilde: the Knave of Hearts had somehow found himself in The Importance of Being Earnest.”
OPERA TODAY (Tales of Offenbach 2016)

“Paul Featherstone, meanwhile, having gurned and shambled about as Rattlebone in Croquefer, sashayed on as Duke Cacatois in The Isle like Austin Powers channelling Sir Roy Strong: velvet suit, ruffled shirt, Noel Coward-ish tenor and an ability to maintain an unflappable languor even while his big number was repeatedly interrupted by honking great duck quacks from the orchestra. That got a lot of laughs…”
THE SPECTATOR (Tales of Offenbach 2016)

“Paul Featherstone is more sophisticated, here is a consummate actor who sings like an angel and moves like a dancer.”
REMOTEGOAT.COM (Ballo 2013)

“The production and performance are tremendous, as intense and compelling as any account of this piece that I have seen. That is largely thanks to Dominic Barrand as Tonio and Paul Featherstone as Canio. These two are singing actors of extraordinary calibre.”
THE SPECTATOR (Pagliacci 2011)

“Paul Featherstone was a superbly kvetching Abraham, his tirades against “the scandals in the capitalist press” in complete contrast to his rather louche Steve Sankey.”
SEEN AND HEARD MUSIC THEATRE REVIEW (Street Scene 2008)

“La Boheme was an excellent production. I have been watching this opera for 45 years and this was as good as it gets. How well Paula Sides and Paul Featherstone as Mimi and Rodolfo have grown into these roles”
THE INDEPENDENT (La Boheme 2007)

“I thought Paul Featherstone was outstanding in the title role…beautifully sung and portrayed.”
THE EVENING TELEGRAPH (Ernani 2006)

“Michele was the tenor Paul Featherstone. His voice had plenty of edge and range…he was a very convincing presence, a violent, murderous, passionate figure.”
OPERA (The Saint of Bleecker Street 2006)

“Paramount to any opera is the necessity to have a strong tenor. Paul Featherstone fitted the bill perfectly, and gave an outstanding performance. There was enviable ease to both his acting and singing and his portrayal of Gustavus could not be faulted.”
THE EVENING TELEGRAPH (A Masked Ball 2004)

“Eric the mild-mannered accountant (the excellent Paul Featherstone) transforms himself into a baby catching superhero…acting with muscle-clenching physicality while singing Coker’s jerkily rhythmic score.”
THE TIMES (Walking Not Driving 2004)

“His rendition of the famous “Nessun dorma“ aria was out of the top drawer.”
EDINBURGH EVENING NEWS (Turandot 2003)